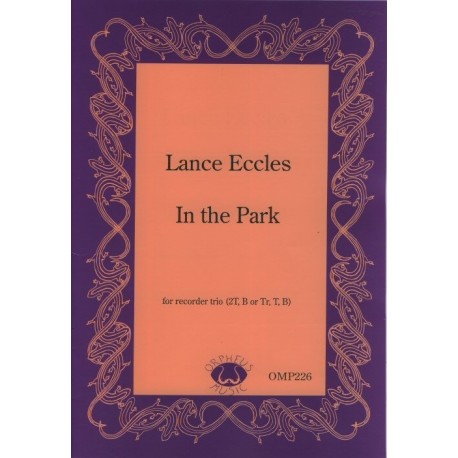 Orpheus Music, OMP 226
This is an entertaining suite in three movements whose titles are On the Swings', Two Old Ladies' and Ball Games'. The composer has laid out his music for two tenors and a bass. However, it is
suggested that the first tenor part could be played on a treble. The movements are quite long, and occasionally demanding in terms of agility, especially for the bass player. Rhythmically the music is
straightforward, but there are many changes of time signature and much to-ing and fro-ing and syncopation 'on the swings'. The other two movements are more chromatic, especially 'Ball Games', and
this again has some interplay with time signatures. This is a rewarding work for study and practice, and a worthwhile addition to the tenor and bass recorder repertory. The music is suitable for solo players or for small or larger groups.

This is a challenging set of three programmatic pieces best suited for upper intermediate or advanced ensembles. The opening piece is called "On the Swings"-and these swings are no child's play! This light and playful piece moves between duple and triple meter in a rocking motion, making you feel as though you are constantly sitting on the edge of your seat--or swing Two Old Ladies" has a rather mysterious aura to it and features unusual chromatic writing, at one point moving into five flats. There are many passing-tone dissonances. The first line appears to be telling a story while the other lines listen and comment.
"Ball Games" features plenty of jazzy and unexpected rhythms to keep you on your game. This piece has a start-and-stop kind of feeling, and in some places it sounds like the composer is trying to evoke a ballpark organ. There are numerous chromatic and rhythmic challenges. This piece is fun to play, but if this were a real ball game, you would not have time to grab a hot dog!

Irene Rosenthal holds a B.A. in music from Arizona State University and did graduate work in musicology at the University of Chicago. She has sung and played piano, harpsichord and guitar, but the recorder is her instrument of choice. She lives in Phoenix, AZ, where she plays with the Canis Firmus Trio and as a guest with local ensembles.