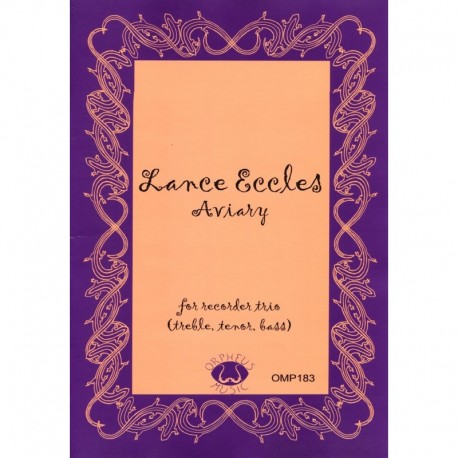 Aviary, another suite of three short pieces, opens up with "Dodoes." Think of a large Dodo bird as portrayed in cartoons - mindlessly wandering in no particular direction - and you will have an idea of this 40-measure trio. Loosely speaking, the piece is in ABA form, but it begins with a D minor chord and ends with the bass moving down an A Lydian scale. This is contemporary harmony, but not jarringly dissonant.

The second piece, "Condors," has interactive alto and tenor parts, and again a tamer bass line. It is more tonal, moving from D minor to C Major, and back to D minor. It also is a good musical picture of the magnificent flight of condors. One interesting aspect is that, just when I think the music is going to fall into a sequential pattern, it never quite does - perhaps representing the unpredictability of the flight of a condor.

The third piece, "Moas," suggests a flightless bird and is to be played in a "strutting" manner. This features lots of repeated notes, use of a descending whole-tone scale, and a series of minor chords that ascend by half-step. It starts and ends in D Major and frequently uses cross-relations, even in the last measure!