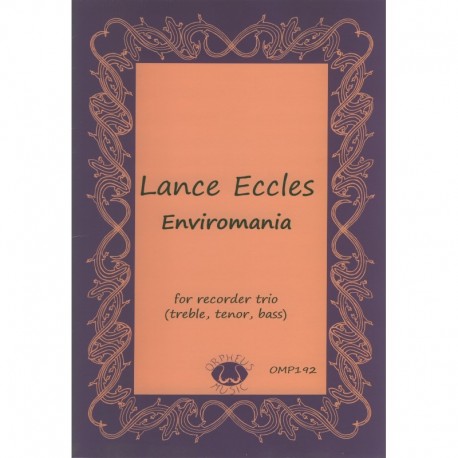 The four movements of Enviromania are "Toxic Effluent," "Carbon Emissions," "Global Warming" and "Whale Hunt." Such titles prepared me to hear unpleasantness in the music.

"Toxic Effluent" does suggest its title, with a constant flow of eighth notes weaving among the parts, and accented harsh dissonances. But the second piece, "Carbon Emissions," took me totally by surprise; it is really a quite lovely trio with conservative use of dissonance. The flowing eighth notes set up in the first movement continue into this movement. The score contains an ominous picture of smoke rising out of smokestacks! Perhaps Eccles meant to convey the idea of the calm before the storm.

The composer is certainly a master at using voice exchanges among parts. There are three striking measures of diminished-seventh chords that descend by half-step, as well as an especially lovely theme in the alto part that floats above the tenor's running eighth notes.

"Global Warming," a march, also employs attractive harmonies. All parts are very chromatic, but not difficult. It ends unexpectedly, with eighth notes on the fourth beat of the last measure. The picture in the score looks like a brewing hurricane - an ominous idea that is hard to connect to the actual music.

"Whale Hunt" strikes me as too lighthearted a piece to bear this title. It left me wondering if the composer thinks a whale hunt is a good or a bad event. If I had to name this last movement after hearing it out of context, I might call it something like "Frolic in the Park." I can imagine this lighthearted piece being played in a parade. The top part is lots of fun, with its many skips of Major and minor sixths. The middle part also gets in on some of the skips, but the bass is tamer.