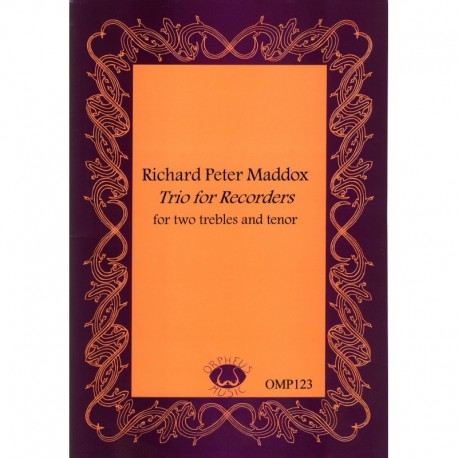 Richard Peter Maddox is an Australian choral director and composer, active in the Armidale area. He has composed works in all forms, including a few pieces for recorder ensembles.

Trio for Recorders is in three short movements. "March" passes the jaunty melody among all three instruments, accompanied by an insistent snare drum-like figuration in the other recorders. "Slow Dance" is elegant, with a gentle swaying motion in ¾ time, "Stepping Quick" is light and wryly humorous, maintaining an energetic drive throughout.

The edition is well-marked and cleanly prepared. It is recommended for any occasion where this particular trio combination is needed [SST].

These is a lot of recorder music coming out of Australia at the moment, most of which seems to have originated in the Armidale area. Richard Peter Maddox is from this area and conducts the Armidale Vocal Ensemble and the Chapel Choir at the Armidale School. He already has several pieces published by Orpheus, and his latest piece is Trio for Recorders which is scored for two trebles and tenor.

It is a suite in three movements. The first movement is a lively march in a folk style, with two contrasting themes which are passed around between the instruments. This is followed by a "Slow dance" which starts in a slow singing style and is interrupted by an insistent 6/8 rhythm from the two trebles. Although slow, the dance seems to gather momentum before returning to its original slow melody.

The final movement is "Stepping Quick". This opens with a two-bar introduction marked "freely", which then launches into a dance that has challenging moments with accidentals and syncopations. It has two ideas that alternates, one being quicker than the other, ending with a recapitulation of the opening.

"Trio for Recorders" is an interesting piece both for the players and the audience, particularly as it is written for the mellow combination of two trebles and a tenor.