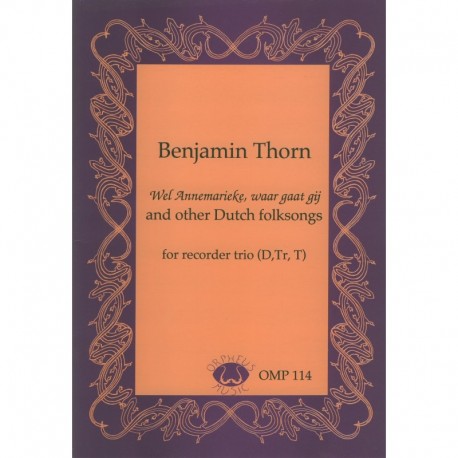 Six Dutch folksongs have been made the basis for a set of recorder trios. The melodies are modal in character, and they have been treated sympathetically in the course of these pieces. Occasionally there is a whole line or a duo. The slurs in the closing bars of "Mijn Vader Is Een Bakker" ("My Father is a Baker") also need to be added to the tenor part in bars 47-48, and the treble part in bar 48. More slurs need adding to pairs of quavers in this movement.

The music is easy to moderate in its technical requirements, and there should be few problems for young players in schools and recorder clubs.

Both Lance Eccles and Benjamin Thorn have provided some enjoyable music here, and these two sets of pieces are among a large set of publications from Orpheus Music that treat folksongs from different parts of the world in arrangements for various recorder groupings.