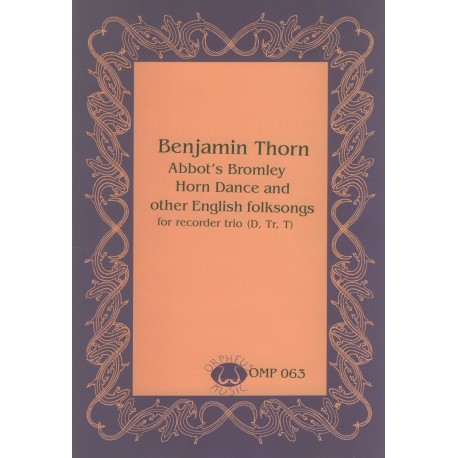 Folk songs have an almost universal appeal, as their melodies have stood the test of time and are rooted in their country's culture.

Benjamin Thorn has drawn on the wealth of English folk songs to arrange a collection of seven of them for recorder trio, SAT, starting with the Abbot's Bromley Horn Dance and including John Barleycorn, Lovely Joan, Droylesden Wakes and some sea-shanties.

The pieces are very well arranged with some interest in all parts as, although the tune is usually in the top part, the treble and tenor have some satisfying accompaniments to play.

Ye Mariners All is a bit of a surprise being scored in 5/4 throughout, and may trip some players up while they try to sort out the phrasing.  It might have been helpful for less experienced players to have been given some indication of phrasing, not only in this tune, but in some of the others tunes as well.

Sadly, younger payers do not seem to have sung folksongs at school and are not familiar with English folksong style, so a few more indications as to expression, or the first verse of the song to set the metre, might have been helpful.

However, this collection is very satisfying for both the player and the listener, and a useful addition to the trio repertoire.