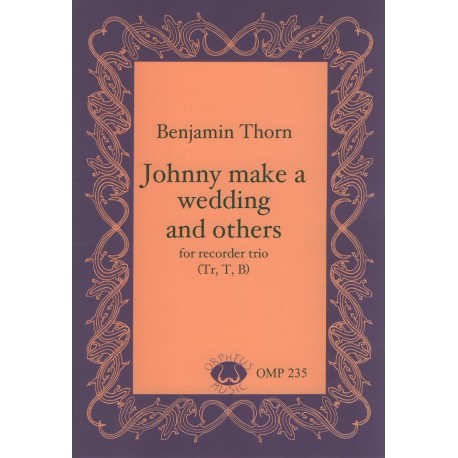 Johnny make a wedding and others

Benjamin Thorn
Johnny make a Wedding and others
For recorder trio ATB
Orpheus Music, OMP 235
This is a group of three pieces, the second and third being 'Pat Fagan' and 'Charles March' respectively. The pieces are based on traditional material which the arranger has used as the basis for his music. The score is for treble, tenor and bass recorders, either three soloists or a larger group.
The music is all good fun for group work and presentation. The last piece is the longest, and is constructed in several repeated sections alternating 6/8 and 2/2 time. The movements are in C and G major, and there are no technical problems for the players.
The score has an amusing cartoon for an illustration.