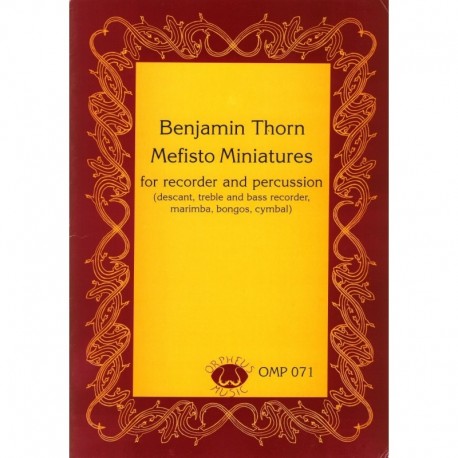 Taking their name from the well-known waltzes by Liszt, the "Mefisto Miniatures" are ten short pieces scored for a range of recorders (soprano, alto and bass) and percussion (marimba, bongos and cymbal).  Although the score contains some interesting biographical details of Benjamin Thorn, rather disappointingly there is no text relating to the performance of this work.  However, it seems fairly clear that the composition can be performed in a variety of forms: firstly, as originally intended as a mixture of pieces for solo recorder, solo percussion and duets featuring recorder and percussion; and secondly, as a selection of up to eight solos for recorder.

No. 1 is an elegant solo for bass recorder in 5/8, with a relentlessly lilting rhythm.  Almost all written in the lower octave, there is a richly expressive tone throughout.  No. 2 begins with an 8-bar marimba introduction before the soprano recorder enters.  This miniature in 6/8 has the feel of a slow jog with a feel of G minor, although the several F naturals and A flats suggest modality.  This movement, as with No. 5 also has an alternative version for solo alto.

No. 8 is a fantasia-like solo for alto recorder marked "freely".  The melody meanders with rhythmic flexibility through this miniature without time signature.  Although bar lines are present, very rarely do two consecutive bars have the same number of beats. The final piece, for alto and marimba, is a challenging piece with rapidly changing time signatures - from 4/4 and 7/8 to 5/8.  Whilst this creates an unsettled feeling to the piece, the movement is sufficiently strong to provide a suitable finale to this ambitiously scored, yet not excessively difficult, work.

The editions are nicely printed.  There are bad page turns in Two Diagonals and a Squiggle: two in the recorder part and one in the percussion.  Two Diagonals... is a gem and the other pieces are also worth checking out.