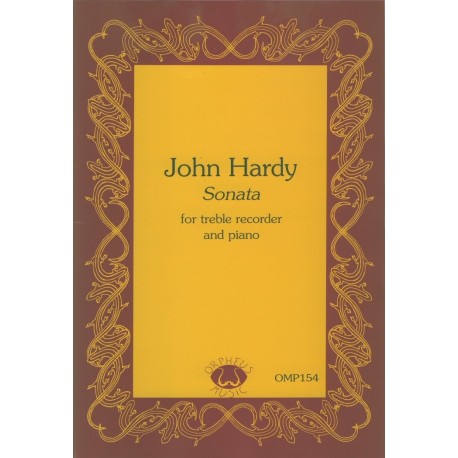 In these two pieces, Australian composer John Hardy (b. 1963) has restricted himself to the whole-tone scale for both melodic and harmonic material - and, in so doing, has perhaps risked setting the listener adrift in a musical sphere void of the harmonic tensions and landmarks to which tonal music has accustomed us. His idiom might be considered a form of scalar and harmonic minimalism.

In remarks accompanying the Sonatina, the composer in fact states that this soundscape is evocative of the Australian desert, "which...seems stark and inhospitable at first, but soon reveals its own special set of mysteries..." In his Twentieth-Century Harmony (1960), Vincent Persichetti cautions that "The true value of the whole-tone scale lies in the contrast it provides when it is used in combination with other scales and techniques."

The two versions of the wholetone scale are c-d-e-f#-g#-a#-c, and c#-d#-f-g-a-b-c#. Because the scales are symmetrical, the listener has no sense of tonic, and, without recurring rhythms, metric shifts and well-defined form, is liable to feel disoriented and ultimately bored. Hardy opposes the two scales from movement to movement, but never within a movement. With respect to holding our attention, he goes out on a limb, to some degree.

Without contrast to chords of other quality, tedium can take hold. The preponderant texture of the piano is two-part, and where the texture thickens, the recorder is well up in the range where it can hold its own. The composer could have offered more contrast in texture by thickening in passages where the recorder is tacit.

The publisher's web site rates both works as moderately challenging - way off the mark with respect to the Sonata, which is very demanding of soloist and accompanist alike. Highly disjunct melodic writing is the chief complication. Both the Sonata and Sonatina exceed the conventional recorder compass, and a number of slurred notes are unfeasible. Alternative fingerings are frequently warranted in brisk passages.

By convention, an accidental is not given next to a note that has been so inflected previously in a given bar. However, this practice does not lend itself to non-diatonic music. For ease of assimilation, the publisher could have applied accidentals throughout.

Orpheus Music has a catalog of over 200 pieces, the Majority of which are contemporary. Both of the works under discussion are available in PDF format from the publisher's web site.

From the pianist's point of view, an unbound format is more practical, since it eliminates difficult page turns. The score's narrow margins, and a staff width of only six millimeters, produces an overall cramped appearance.

By contrast, the recorder parts are easily-read, and page turns can be effected at leisure. The hard copy is simply staple-bound and will likely fall apart quickly.

At the time of writing, the Sonatina is incorrectly listed as "Sonata" on the web site. The composer's biography, as well as program notes supporting the exclusive use of the wholetone scale, appear at the end of the Sonatina score, but not in the Sonata.

These pieces are not liable to win over players or audiences immediately. This is true particularly of the four movement Sonata; at over 15' in duration, it could produce a severe wholetone allergic reaction. The Sonatina comes to about half the Sonata's duration. At roughly 2', the Sonatina's slow movement is terse, yet appealingly lyrical. Its merits might have been set in greater relief, had the surrounding movements not also been whole-tone.

Once technical obstacles are surmounted, these pieces may begin to ingratiate themselves to players. Audiences may require a few hearings before the music begins to deliver.

Those who find appeal in these pieces may also enjoy Claude Debussy's "Voiles" in his First Book of Preludes (~4') which, although predominantly whole-tone, does contain traces of pentatonicism and chromaticism.