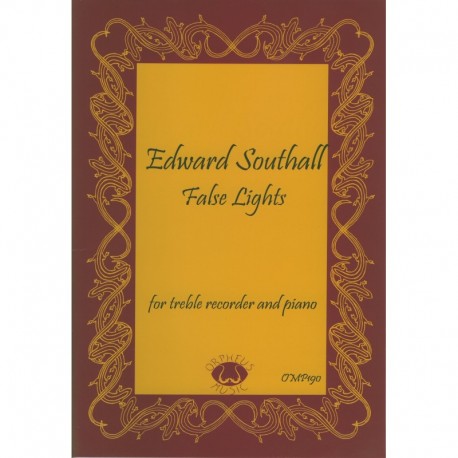 *Contemporary Piece.* Atmospheric evocation of the deliberate wrecking of ships sailing near to the east coast of England.

These three recent editions of music for alto recorder and piano from Orpheus Music are typical of the range of material available from this enterprising Australian publisher, which provides a valuable service by offering such a scope of works by composers of varying backgrounds.

Lance Eccles is a prolific composer for recorder with a lively sense of humor. Dragonflies is a tuneful evocation of the creatures, and places only moderate demands on both players.

Written in a flowing 3/8 time, the piece features a lyrical recorder part that uses the upper range of the alto to good effect. The melody is broken occasionally with trills and tremoli and the piano accompaniment features darting arpeggiated figures, all of which suggest the whirring wings and sudden gestures of the dragonfly. There are some abrupt harmonic shifts, but these, too, suggest the random movements of the dragonfly's flight. At about two minutes' playing time, the piece does not wear out its welcome and would make an entertaining novelty for a recital program.

Sr. Duchesne Lavin's set of four short pieces entitled Rhythmic Recorder also paints a series of tone pictures and would be quite manageable by lower intermediate players. "Jazz Waltz" and "Rondo Rag" have the strongest rhythmic characteristics, while "Pensive" and "Pentatonic" provide a reflective contrast.

The writing is simpler here and the effects less dramatic than in the Eccles, though "Rondo Rag" has a nice jazzy feel and some challenging syncopations. The collection would probably work best for a beginner looking for new challenges.

Edward Southall's False Lights is at the other end of the spectrum, filled with challenging writing and subtle effects. Its overall style is reminiscent of later Arnold Schoenberg, with disjunct melodies, pervasive dissonance, and extremely detailed dynamic and articulation markings. A composer's note describes the piece as having been "inspired by tales of the deliberate wrecking of ships sailing near to the east coast of England."

The character of the opening and closing seems to evoke the eerie coastal setting, while the middle section, marked "weightless and simple," is scherzo-like. Throughout, the complex interplay between the two instruments will provide a challenge even for advanced players, as will the necessity of maintaining a clear forward direction with such fragmented musical material. While the dynamic markings are wide-ranging and detailed, they tend to follow the rise and fall of the line in the recorder part and so should generally have their intended effect.

This style is not often encountered in music written for the recorder, and so will prove intriguing for the skilled and adventuresome player.

All three editions are thoughtfully and attractively presented. Although there are a number of discrepancies between the score and part in Rhythmic Recorder, the two can easily be reconciled with a few minutes' careful comparison.