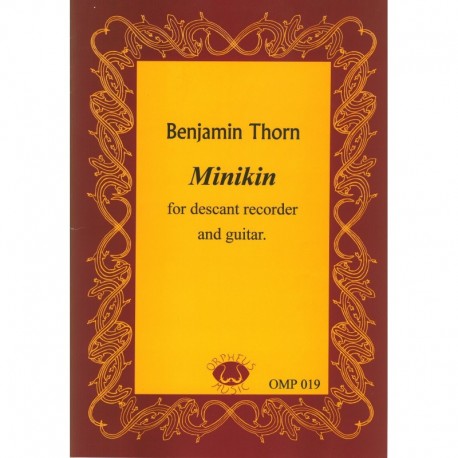 *Contemporary Piece.* Whimsical and tuneful piece for recorder and guitar. Reworks similar material for the recorder, in fast and slow versions, over differing accompanying patterns in the guitar.

Minikin opens like a slow waltz with a sinuous Spanish-sounding melody. Later becoming more animated and incisive, with a cadenza employing some FF martellato guitar chords.  A ten-bar guitar solo leads to a resumption of the waltz, now somewhat quicker, to end with a vigorous flourish from both partners.  It takes about two-and-a-half minutes.  The chord repertoire used by the guitar is a very rich one.

Australian composer Benjamin Thorn has written this brief, one-movement work for recorder and guitar to show the capabilities of both instruments.  It is very much a duet in which both instruments have a chance to shine.  The piece is in four sections: an opening gentle section, a lively middle section, a "quasi-cadenza" for both instruments in turn, and then a return to the lively material to end the piece.

Intermediate performers should be able to perform Minikin well, since it is quite traditional in technique, and the most difficult parts are the frequent meter changes in the lively section.