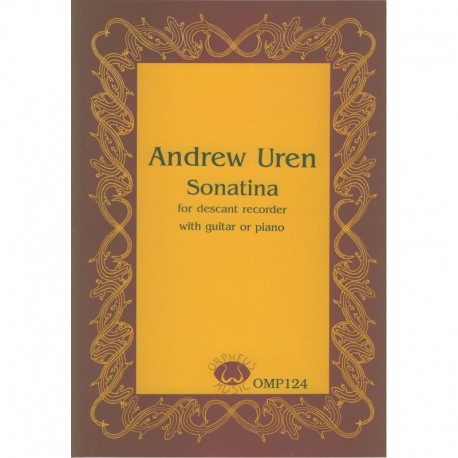 *Contemporary Australian Piece.* Lovely impressionistic work with accompaniment in versions for both guitar and piano.

Andrew Uren (1955-1989) was an Australian composer and guitarist who has focused largely on works involving his own instrument. Because of his very young passing, much of Uren's music is still being published and edited.

Orpheus's edition of Uren's Sonatina is edited by Malcolm Tattersall from the composer's original manuscripts. The guitar part was fingered by the composer.

Sonatina is a work that would be equally effective with either guitar or piano, and two idiomatic accompaniments are thus provided in this edition. This flexibility makes the work very attractive for a variety of teaching or recital purposes, since the recorder part remains identical.

The work is indebted to the musical language of the early 20th century French impressionists and also the post-impressionist music of Francis Poulenc. The three very short movements (Moderato, Tranquillo and Humoresque) each have a contrasting character, but share similar musical material. This is a distinctive and appealing work of moderate technical difficulty, and is strongly recommended.