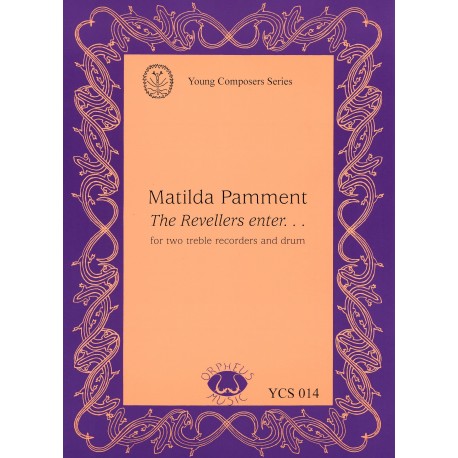 The Revellers enter... in 7/8 time and a lively entrance it is too !

This piece, for two treble recorders and drum, is published in the Orpheus Music, Young Composers Series. It is composed by Matilda Pamment, a young Australian recorder player who is studying with Zana Clarke and who plays with the young recorder group Batalla Famossa.

The piece opens with an insistent rhythm of 12,12,123 moving to a second section in which the 1st treble plays a 123,12,12 rhythm against the original rhythm. The drum enters at bar 32, and although its part is written throughout, there is freedom to elaborate on the percussion part at the performer's discretion. The central sections are slower and rhythmically more steady before returning to the original 7/8 for the closing section.

The piece has a Renaissance feel but is written in a modern idiom and possibly was inspired by Matilda's involvement in the National Shakespeare Festival. It certainly would be a lively interlude for a Shakespeare play.

Orpheus Music publishes contemporary Australian and world music for recorder. The Young Composer Series features works of emerging composers, many of whom have received grants to support their writing. Matilda Pamment is a student in Armidale NSW, where she studies recorder with Zana Clarke and plays in the group Batalla Famossa.

If the title "The Revellers enter..." suggests a processional, it must be reserved for the fleet-footed as it begins in a brisk 7/8 time! It opens with a section for two alto recorders that is consistently 2+2+3. When the second section begins, the second alto continues with the same subdivision of 7/8 while the first alto switches to 3+2+2. A contrasting slower section in 12/8 features the addition if a drum part that is notated - but with with a suggestion to 'elaborate' on the written part.

A gradual return to the opening tempo guarantees a challenging time for all three. because of the rhythmic complexity of this piece, I think that every player would want to read the score even though the parts are furnished for the two recorders.