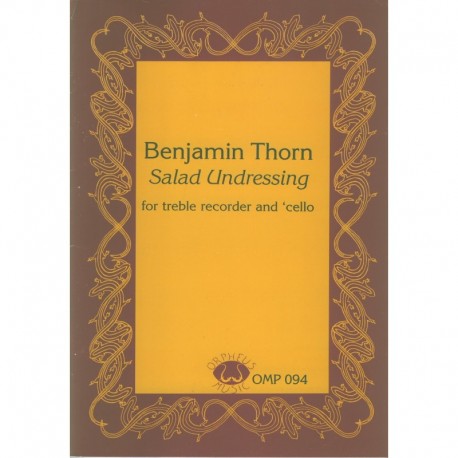 This charmingly titled, four-movement work was written for Jodie Goldney and Georg Martens-Moussa.  The first movement begins with a highly melismatic Moderato, where the recorder weaves over a pedal C with pizzicato Gs in the 'cello.  After ten bars this makes way for Presto in 7/8 with such a breathless feel to it; especially where the division of the 7 beats alters from 3+2+2 to 2+2+3 and back again!

The second movement is marked "Gently" and, although in 8/8, has a strong Siciliana feel to it.  As with the opening movement, thorough and careful counting is essential to achieve a satisfactory ensemble with the 'cello.  As the movement progresses the quavers give way to predominantly semiquaver motion.  This is followed by the third movement, a lilting 6/8.  Like the rest of the piece this has a key signature of 3 flats, but this has a more modal character to its C minor home and is therefore very folk song-like.  The finale is another Presto, but with a 9/8 time signature.  However, this is a 9/8 with a difference - many of the bars are divided into a 3/4 + 3/8 rhythm.  This provides tremendous rhythmic drive and tension.

Salad Undressing is certainly a well-conceived piece for players with a secure technique and sure-footed rhythmic awareness.  I imagine that this excellent new work will receive many exciting performances in concerts and festivals over the next few years.

Except for the opening section of the first movement (which offers an enchanting, highly ornamented cadenza a la Greek wedding music, played by the recorder over the 'cellos drone), Thorn's Salad Undressing is a true duet with both instruments as equal partners.  The entire piece is in c minor and has an exciting odd-meter dynamism typical of many of Thorn's works.  Though the content of the four movements is fairly similar, each will have a different impact upon the listener due to their differences in tempo.

The edition is very good, and the music is worth checking out.