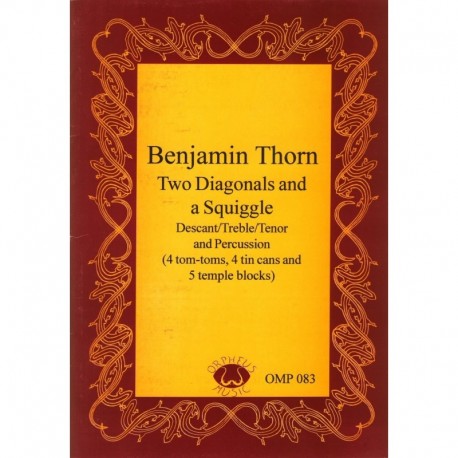 Two Diagonals and a Squiggle

Yet more imaginative music from the prolific Australian composer!  This piece was composed in 1991 and that same year was awarded Commended in the Fellowship of Australian Composers competition: however it has only recently been published by Orpheus.

This piece is scored for one recorder player (Desc, Treb and Ten) and percussionist (requiring 4 tom-toms, 4 tin cans and 5 temple blocks.

In the recorder part, Thorn requires the use of multiphonics, glissandi, 'rolling' ('to produce upper partials and whistle tone') as well as his trademark 'throaty grunt'.  Virtually the entire second movement requires simultaneous singing and playing and a third stave is added to notate this; female singers will have to be prepared to switch vocal registers to fit the compass of the score.  However, percussionists will also need their singing voices: the final movement contains the instruction '+ ad lib vocalisations'!  The tempo markings also heighten the challenge, with the final movement extremely fast at quaver=240!

The editions are nicely printed.  There are bad page turns in Two Diagonals and a Squiggle: two in the recorder part and one in the percussion.  Two Diagonals