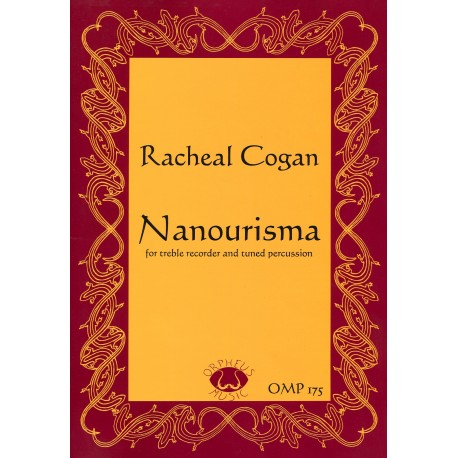 *Contemporary Piece.* Ethereal filigree work based on a Greek lullaby. Some beautiful sound combinations including use of voice. D

Nanourisma ("lullaby" in Greek) was recorded by Racheal Cogan, playing recorder and singing, with Tony Lewis, percussion, on their 2006 CD Transcience: contemporary modal music Orpheus Music OM602; see the CD review in AR, September 2008).
It is a rich, soft, dark-timbred piece likely to evoke a dream sense for many players and listeners. The
piece is difficult, though very effective and within the grasp of a recorderist who has learned to hold a sung note while playing related pitches. The slow tempo (-50) is, as the composer comments, "quite rhythmically free."

The demands on both players are in the area of musicianship rather than virtuosic technique. The played
notes for the alto range from F at the bottom of the treble staff up to B a fourth above the treble staff. Fingerings for trills and simpler ornaments are explicitly indicated in the score. The sung notes are slow-moving and primarily provide a drone. In her introduction to the piece, Cogan describes options for performance; between her comments and listening to the recording, plus my own experiments in playing the piece, I find that it is necessary for the recorder and voice to be in the same pitch relationship as indicated in the P1 score. (Some other pieces, in which the player sings simultaneously while playing, work with the voice at either the notated octave or an octave below.) This makes the piece better suited for women performers than men, but Cogan suggests experimentation with instruments to get that desired effect. I tried the piece with tenor recorder fingered as an alto, which placed it low enough that I (a bass/baritone) could sing in the appropriate octave.

It is important to note that the piece can be performed with or without percussion with Cogan's blessing.
However, if percussion is used, the pitches are critical, and the tuning of the gongs and bells needs to closely match the score. Thus if one transposes the recorder part's range, the percussion must also be transposed Cogan's Nanourisma is a beautiful and satisfying work. Learning it will strengthen one's technique in simultaneous singing and playing. The composer provides a readable, performable
score with flexibility to suit a variety of players. Orpheus Music provides a well-printed edition. This reviewer worked from the hard copy printed by Orpheus, though the same edition can be downloaded at a reduced cost.