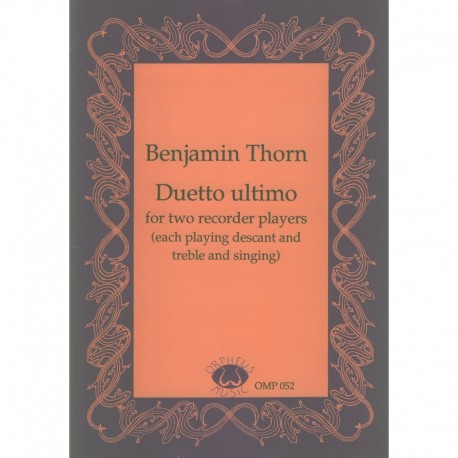 *Contemporary Piece.* A lively little duet that stretches the definition of duet.

Here are two newly-published compositions by the gifted Australian recorder player and composer Benjamin Thorn, whose musical direction is defined not so much by a particular language of style as it is by a unique and quirky personality.  In Bagliori Thorn employs a dissonant, atonal vocabulary to create a paradoxically delightful music that is - like the Addams Family - both spooky and spoofy.  The harpsichord and the pair of recorders (the latter functioning simultaneously as a team) play a cat and mouse game in both the beginning and ending section, each in turn playing a little spurt of notes in reaction to the other.  During the harpsichord passages the recorders often play mocking gestures that utilise multiphonics.  In the brief middle section, the harpsichord drops out and each recorder player takes turns playing a free-flowing melody.  The mocking multiphonics are still employed in this section, but seem more friendly and fun-like.

The more recently-composed Duetto ultimo employs a pan-diatonic language, due largely to the gamut of notes that can be played with only one hand.  Besides playing both soprano and alto recorders at the same time, both recorder players must sing into their instruments.  These vocal parts are notated on separate staffs but for both players they pretty much double the soprano recorder lines.  This is a difficult and tricky piece to play, but for the audience it certainly offers an exciting show.  It is particularly effective in that is starts with only the first recorderist playing soprano and gradually adds parts so as to continually increase the textural density.

The editions are well-printed, with only one bad page turn in the first recorder part of Duetto ultimo.  Both pieces are worth looking into and are best suited to professionals or very high-level amateurs.