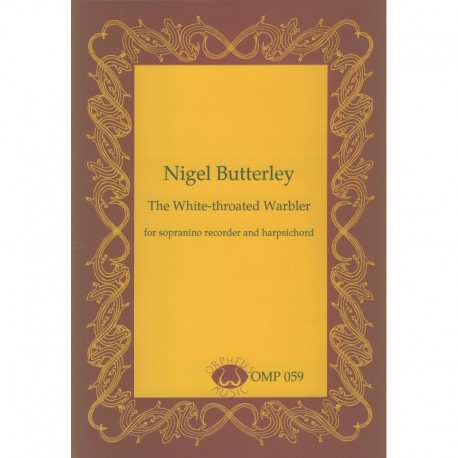 The White-Throated Warbler was written during Carl (mistakenly printed as "Arnold" in the preface) Dolmetsch's 1965 tour of Australia and is yet another example of the finely-crafted compositions which have emanated from the antipodes.  And, as with so many other works in the repertoire, it takes its inspiration from birdsong.  The work is relatively short, lasting just over a minute, set to a slow tempo and makes use of serial compositional techniques, although the tone row used is not strict.

Compacted into the small framework of The White-Throated Warbler are a wealth of musical devices including trills (the wavy sign for the one in bar 2 is far too long), quintuplets and septuplets.  This is all admirably supported above an equally evocative harpsichord accompaniment where the trills, tremolos and arpeggiated chords add to the ornithological nature of the piece greatly.

This is a valuable addition to the repertoire for sopranino recorder, and its much overdue re-publication is highly appropriate in light of recent research into the music commissioned by, or written for, Carl Dolmetsch.