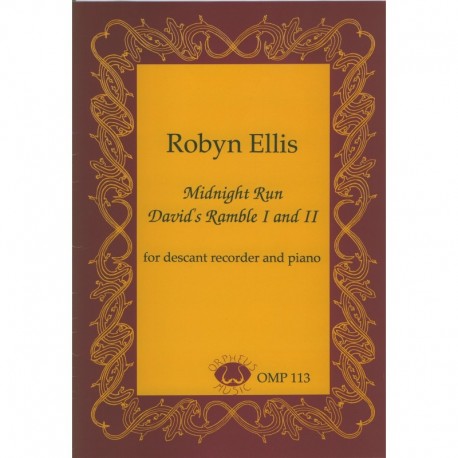 These three short pieces for soprano recorder and piano are a delight to play. They are whimsical, with catchy melodies, infectious rhythms, and enough quirks to warrant repeated play.

Midnight Run is marked "animato", with no time signature indicated. An off-beat melody moves from 5/4 to 4/4 to 12/8 time in the first three bars of music alone. The rhythm continues to change throughout the piece - but, since the two performers support each other, the effect is more whimsical than difficult and very catchy. I usually found myself drumming the rhythm on the edge of any available table for some time after practising the piece. (Note that, in bar 32 of Midnight Run, there is a missing accidental in the recorder part. The final G in the bar should be G# to bring it in line harmonically).

The two pieces called David's Ramble are a little simpler rhythmically, since they are predominantly in 6/8, but Ellis adds the occasional bar in 9/8 and some syncopation just to keep you on your toes. Both pieces feature a key change in the middle (G Major to F# minor in #1, and G Major to d minor in #2), and the second Ramble requires a fair bit of dexterity in the soprano's highest register

These pieces appear to be Ellis's first published works for recorder, and we can only hope for more to come. They are highly recommended.

Geoffrey Allen (with thanks to Peter MacDonald), American Recorder, January 2006