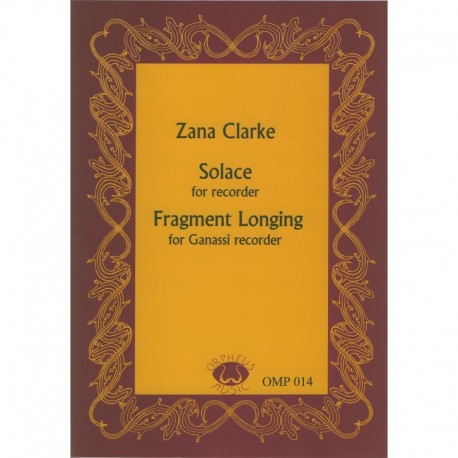 *Two Contemporary Piecee*. Two melodic pieces. Fragment Longing explores some of the timbral and tonal possibilities of the Ganassi recorder and has some aleatoric sections. MD

Though Solace was written for a Ganassi recorder, we are told that it is suitable for any recorder, whereas Fragment Longing must have a Ganassi, without which the wrong effect would be created.  Solace, notated as for a C instrument, with half-a-dozen of the top most E, is a single-page two minute solo, fairly described by the publisher as "moderately difficult".  It has a modal flavour with D as the final and though measured, it has no time signature, so you need to figure out how some groups of note cohere into phrases, though the overall structure is simple and clear.  The third of its four sections is a big arch of twelve melodic variants of the same lively one-bar rhythm and is marked "Fast", a passage of nervous agitation, not to be quelled at once, but after a second outburst, calm is induced and all ends serenely.  Fragment Longing uses a number of modern techniques to support the development of a simple modal melody, including the use of the knee to stop the end-hole (this is what could produce the 'wrong effect'), at one point the knee having to oscillate on and off the instrument, boxed notations for improvisation, and saying 'sss' into the recorder while playing.  The piece lasts just over three minutes.