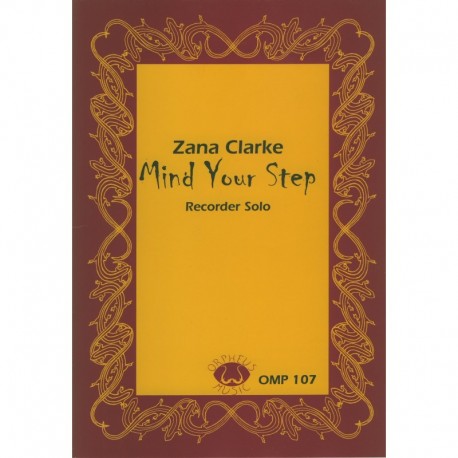 *Contemporary Piece.* Fun funky rhythmic piece in quasi-minimalist style. Makes some use of singing into instrument.

The notion behind these two linked works is an announcement heard by the composer at the end of a moving walkway at Amsterdam Schiphol airport, exhorting pedestrians to mind their step as they come off the walkway.  The inflection of a falling fourth given to the last word by the female voice inspired this composition.  It exists in three versions, first for recorder solo, then reworked as a guitar duet and finally as a version for recorder quartet.  Only the first and third versions are available for discussion here, although it would be interesting to see how the material transmutes to the guitar duet format.

The recorder solo version OMP107 is written for alto and voice.  The voice part is described as preferably for a female player, although a male player playing on a bass recorder is also a suggested possibility.  The vocal part is present throughout the work, largely in union or octaves with the recorder except for a few passages where dissonance briefly occurs, and several where the actual words "mind you step" are sung.  After these three crotchets with their falling fourth, the rest of the material is made of syncopated quaver and crotchet patterns bouncing, for the most part, around the fourth and its inversions.  The use of so much doubling with the voice becomes rather a surfeit after a while.  It is like feeding your dinner guests foie gras as the main course.  One gets the impression that the listener would soon tire of the unvaried timbre.  Similarly, the sung text "mind your step" is a vaguely amusing idea, but not really of enough significance to justify this level of development.  In the end it is too easy for this motif to sound rather precious, and this, combined with somewhat minimal musical material makes it rather hard to recommend this version for performance.

In the quartet version OMP108 the vocal parts do not feature throughout the work and 'mind your step' text is absent, although the piece is still based on the same falling fourth motif.  However, treated in a purely abstract way, as here, the effect is more satisfactory.  Additionally, although the overall feel of the piece is the same, the work is transposed to accommodate the quartet tessituras and the addition of an harmonic level to the composition makes for a far more interesting listening experience as the motivic material justifies development when treated on more levels than the merely melodic.  The minimalist effect is still present, but the interaction of parts adds a distinct extra dimension.  Technically neither of these works is particularly difficult, although the solo version requires more vocal ability and accuracy than many works using this device.  Even in the quartet version, one would have to wonder about the extent to which the voice-and-recorder-in-unison feature occurs, less frequently as it is than in the solo version.  Overall the quartet version is a more interesting exploration of the material, and, with imagination, could make for an effective concert piece of not too great a difficulty.