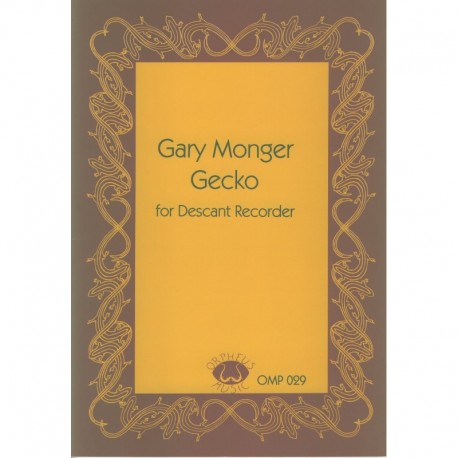 Gecko is a one-page composition for solo soprano recorder that can be performed in less than a minute.  The rhythm is complex, using constantly shifting time signatures, syncopation, and some additive rhythms.  It has a key signature of one sharp, starting on a B, ending on a D, and in between using every note in the chromatic scale.  Technically speaking, this could be learned by an upper intermediate player.  The range is from low D to high C, one whole step short of a two-octave range.  There is one measure of flutter tonguing and one easy-to-play double stop.  The tempo marking is crotchet = 128, but players who are less secure with complex rhythms might need to set their metronomes to the eighth note.

This piece almost seems like a transcription of an improvisation, scurrying around much like a lizard (thus the title).  The main organisational principle is motivic development - reminiscent of Copland or Schoenberg.  The composer takes a motivic shape, manipulates and extends it, thereby "growing" the piece from one idea to the next.  At the beginning most motives are based on "quartal harmony" associated with Copland.  Later, there are some whole-tine scale references.  I would call this piece "post-tonal" or perhaps "freely tonal".

I liked it the first time I played it, and I like it more upon each repetition.  I enjoy the clever development of motives and especially like the final measure, which is an echo effect separated by a 5/8 measure of rest.