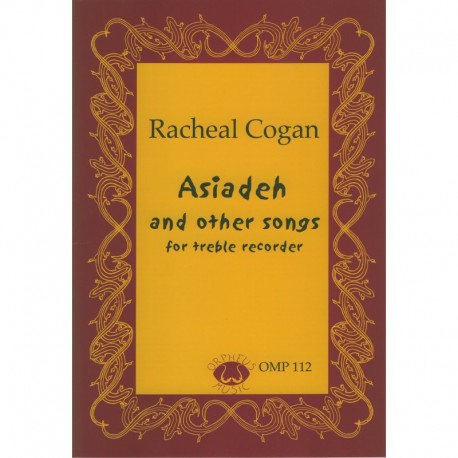 Four fascinating pieces using middle eastern forms and idioms. Can be used as the basis for improvisations or played with other instruments. MD

OMP112 Racheal Cogan Asiadeh and other songs for treble recorder

This new volume from Racheal Cogan comprises four songs in total: "Asiadeh", "Panjaneh", "Waltz" and "Maya". It is well conceived and a must for any players looking for something a little different. The pieces were originally written for a Ganassi alto in G, though they are here presented in a version for standard treble recorder. Both the songs and performing style are greatly influenced by Cogan's studies of eastern Mediterranean music, especially Greek and Turkish. And her preface indicates many ideas, e.g. ornamentation and improvisation, which are appropriate for the performance of this music.

"Asiadeh" is described as rhythmically a karsilana: a Turkish dance in 9. Interestingly 9/8 here presents itself as 3/4 + 3/8 - guaranteed to keep players on their toes. The acciaccaturas will also keep you alert as the Majority of them are connected to the note which precedes them, rather than, and more normally, note which succeeds them.

"Pajaneh" is in 5/8 and again features lots of ornamentation. With a D Major key signature the turn on upper B will require some consideration, as will the mordents on upper A# - how narrow or how wide an interval will be apt here? Something left very much to the players' personal taste.

"Maya" is in 6/8 and with its occasional wide leaps compares to some of Telemann's writing in the Fantasies. Written in a sort of rondo form, there is an eight bar Teslim (borrowed from classical Turkish music) sandwiched between each of the five sections like a chorus.

However you decide to perform these songs - as solos, in unison with other instruments, with a drone accompaniment, or even with percussion - they present the musicians with an interesting and rewarding challenge. Well worth studying, especially if you're looking for a change from the usual fare.