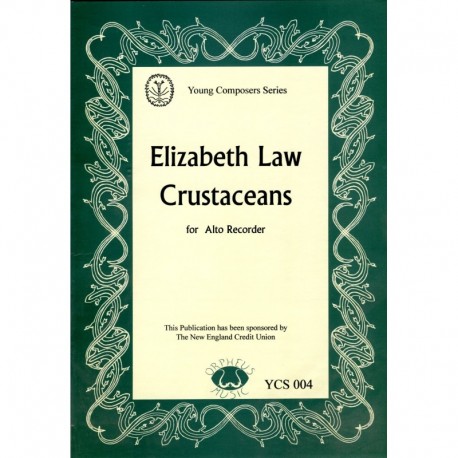 Evoking a crab on the beach. A strong rhythmic piece.

Elizabeth Law's Crustaceans came as a very pleasant surprise.  Another Mendelssohn?  Perhaps not, but at least music which has wit and flair.  This is for unaccompanied treble, has no time signature and presents some technical challenges; as well as being able to tackle some quite tricky note patterns, the player of 'Crustaceans' has to stamp a foot, produce some largely unnotated twittering and make random finger sounds.  The use of a novel scale pattern of irregular intervals starting from a low G (though it never appears as a scale as such) gives the music a distinct flavour.  Beginning with just a couple of notes, the composer builds a sequence of fragments, gradually introducing more notes and getting higher in pitch as the speed increases - rising to a top C.  The title refers to crabs scurrying across a beach but the music has its own logic.  I can imagine audiences really enjoying this little piece and, once they've got round the notes, recorder players too.