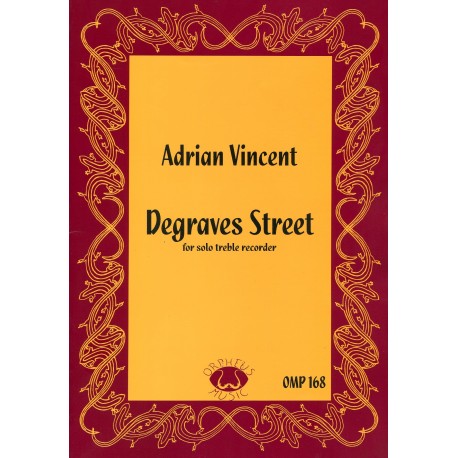 *Contemporary Piece* in three movements. Some use of avant-garde techniques. Attractive solo piece that evokes a Melbourne streetscape at three different times of day.

Adrian Vincent is an Australian composer and recorder player whose interests include popular and art music. His activities and accomplishments are outlined at http://run2r.com/running-music-artists.aspx

Degraves Street is a musical vignette of life on this Melbourne street at morning, noon and evening. The score includes a rather grainy photograph of a street scene, c.1940 - while uncaptioned, one presumes it is Degraves Street at a busy time of day.

"Morning," the first movement, is in ternary form. In the recapitulation, the opening phrases return, but in altered sequence. The opening phrase is also the concluding phrase. As it approaches the cadence, the Lydian mode is suggested; the second phrase has a Dorian quality.

Mood contrasts are indicated with "free," "playful" and "urgent." Modal bipolarity manifests itself in the middle where B and Bb are opposed in a given bar, then F and F#.

At two points the performer is asked to lift the upper lip off the recorder briefly to produce a sotto voce. The result is a physical unsteadiness that could be avoided by instead opening the lips at the sides so that the instrument remains securely in place and the embouchure can more precisely regulate the ventilation.

In "Noon," the performer might well deliver the desired "light, energetic" quality at somewhat slower tempi than indicated. Irregular meters such as 5/8 and 7/8 are featured. The slendro scale (an oriental pentatonic scale) makes a transient appearance, evocative of Balinese gamelan.

"Mysterious, with expression" is the style indication for "Evening." Symmetry is accomplished by a midstream shift from low-to-mid tessitura to high, then back to low-mid, rather than by melodic scheme.

The composer reveals awareness that special techniques are effective in inverse proportion to their use. Thus, although glissandi, finger vibrato and extreme overblowing are required, they are ancillary rather than predominant. Vincent suggests an amplified performance with artificial reverb, as well might be warranted outdoors or in a dry acoustic. Opportunities for rubato and indefinite pauses in the first movement abound, making duration difficult to specify. The reviewer's playing of the piece ran just over six minutes.

The publisher assigns Degraves Street a difficulty rating of "moderate".

Anthony St. Pierre, of Toronto, ON, American Recorder, May 2012