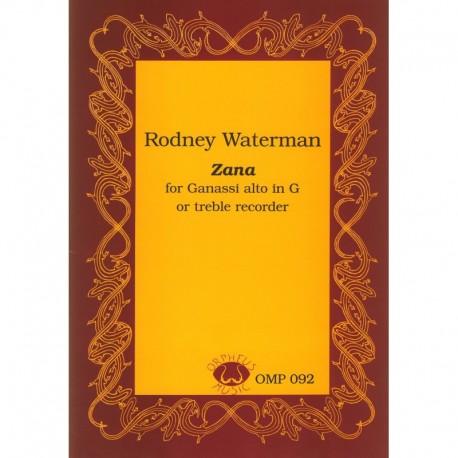 Zana began life as an improvisation and was inspired by "the beauty and possibilities" of Fred Morgan's Ganassi altos that the composer played whilst working as a tester in Morgan's workshop. Waterman has infused his love of the Ganassi recorder with a Brazilian flavour and produced a sunny Samba-type piece for alto in g', although an alternative version in f' is also supplied.

The work is relatively short but can be taken at many levels. For instance, intermediate players may be looking to simply expand their repertoire, whereas advanced performers could integrate rhythmic accompaniment ad libitum or add a guitar part.  There's no reason why central ideas can't also be improvised around.  At the very least Waterman's music should be instilled with zest and energy, just as the composer intended.

Rodney Waterman, the composer of Zana (named after recorderist and Orpheus Music Proprietor Zana Clarke), is an Australian recorder player who is enamoured of Brazilian popular music.   Zana is pure fun.  Waterman uses mild special effects to create a parody of a samba.  Most hilarious is his use of a wide vibrato created by waving the cupped right hand over the window (familiar to most recorder players through Hans-Martin Linde's Music for a Bird and/or the final section of Ryohei Hirose's Meditation) to imitate the sound of an old, out of tune Wurlitzer electric organ.  The most difficult aspect of this piece is its rhythms.  They are very tricky to read, but flow naturally once they become familiar.

Zana offers two scores: one for Ganassi alto in g' (preferred), the other for standard alto in f.