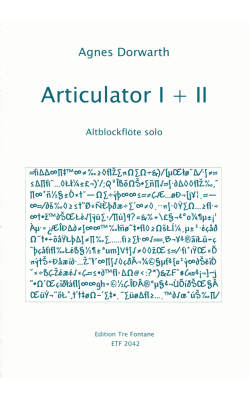 There is music that doesn't really need a detailed explanation - it explains itself.

Everyone should think of their part, but please not too much and, above all, not the wrong thing! Perhaps Articulator is a cheeky musical narrative spoken through a recorder. Or a fun exercise to train the tongue for every imaginable articulation syllable. Or perhaps (based on the film "Terminator", which was the godfather of the title) an ironic weapon to use against unteachable scoffers who think the recorder is only suitable for playing simple children's songs...

In any case, text and tone should be in good balance; the spoken text is not quieter than the played note, but also not in the foreground, the tempo as fast as possible, the spoken syllables still understandable. In this sense Have fun articulating!