> Recorder Sheet Music>Solo>Treble>Absence and For Fardin 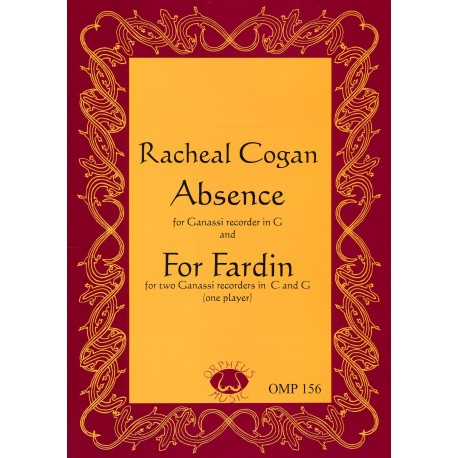 Absence and For Fardin

ABSENCE AND FOR FARDIN, BY RACHEAL COGAN. OMP156, 2006.
Ganassi recorder in G (Absence); two
Ganassi recorders, C & G,one player
(For Fardin). Sc 10 pp.
Racheal Cogan (b. 1968) is an Australian recorder player and composer with an interest in the music of other cultures.

The two pieces here, Absence and For Fardin, are modal innature and are made up principally of repeating melodic cells, usually in a gentle compound time and decorated with quick ornamental figures-all of which gives them a rather exotic and contemplative character. According to Cogan's detailed introductory note, Absence, which is in three large sections, explores different aspects of separation but ends more optimistically. It moves briskly, but the basic notes and rhythms are quite approachable as long as the player is familiar with G transposition.
The technical challenge, which makes it appropriate for advanced players, lies in the many special fingerings given by Cogan to produce quick mordent-like figures and to provide clear dynamic effects and special tonal colors. The last section of the piece requires simultaneous singing and playing (though the vocal pitches are easily found). It is the coming together of voice and instrument that provides the final sense of reconciliation. While the music may seem rather straightforward at first to the listener, it is thoughtfully-constructed and makes quite a satisfying effect.

For Fardin, written for a friend of the composer, is for two recorders played simultaneously by one performer. Cogan instructs the player to sit so that the recorders are supported between the mouth and the leg, such that one recorder can be played with both hands while the other is other-wise unsupported and sounding with open holes. Although this takes a little getting used to, the piece is quite approachable and should be manageable by an upper intermediate player with access to Ganassi recorders For both works, Cogan recommends the participation of percussion, and she has appended some sample rhythms by her duet partner, percussionist Tony Lewis. She also invites the recorder player to add to her written ornaments and re-fingerings, thus reinforcing the essential improvisatory character of both pieces.The music is carefully printed and avoids difficult page turns. It will prove an unusual and rewarding experience for anyone with Ganassi recorders, and especially those who are able to work with a percussionist.