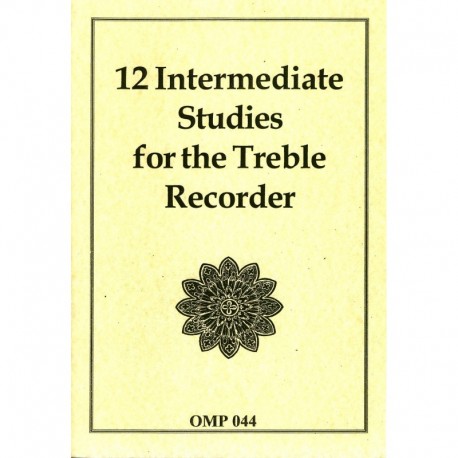 Benjamin Thorn has contributed five studies to this book.  The first, entitled "Study on La Romanesca" has a straightforward melody with an implied ground bass harmony.  The second Thorn study is called "Hexatonic Study for a Belly Dance".  This delightful, fun-to-play melody is created with a six- note scale (D, Eb, F#, G, A#, B) and is in 7/8 time.  Heavy usage of the half steps as well as the augmented second give this melody its "belly dance" flavour.  The melody is transposed up a Major third and transposed again up a tritone.  You are instructed to play this "seductively" and with each repetition of the melody to play faster.

The next Thorn piece is called "Study for Leaps and Double Melodies".  As the title implies, intermediate players will get valuable practice playing very wide ascending and descending intervals, as well as practice bringing out both parts of a compound melody.  Then comes "Study for a Jig", an amusing, jolly piece in the typical 6/8 "gigue" meter.

Zana Clarke has contributed "Pebbles", an interesting piece that explores the upper range of the recorder by climbing higher and higher in sequential passages.

Miggs Coggan has contributed one piece entitled "Come into my Study, Son!".  The rhythm of this piece is based on a poem with the same title about a father trying to instil the values of the grandfather onto the son, with words like "Before he had his breakfast he'd be out chopping wood.  No one said he should.  He just did it!  He just did it!"  When the text and the music are compared, the music becomes humorous, especially in the "He just did it!" sections.

Rodney Waterman has contributed two interesting pieces entitled "Grass Tree Study no 1" and "Grass Tree Study no 2".  The first opens up by exploring the descending tritone between b' and f'.  Then it goes on to explore the stratosphere of the alto recorder's range, ending on a d'''', not the most pleasing note on most alto recorders!  The second study explores the difficulties involved in jumping back to low F from various intervals, many of them quite wide.  The piece also explores shifting time signatures with the eighth note held constant.

Tallis Fiore has contributed three solos.  "Recorder Solo 1" is an appealing study that explores various transpositions of the Dorian scale.  It contains some wide ascending and descending leaps, descending seventh chords, repetitive sixteenth-note patterns in ascending half steps, as well as winding sequential passages.  "Recorder Solo 2" is a nice study unified by an attractive theme using dotted rhythms as well as triplets.  This theme undergoes various transpositions and other transformations, alternating with work in sixteenth notes and gradually widening intervals. "Recorder Solo 3" is composed in c minor, but when a surprise Db sneaks in, the flavour changes to C Phrygian.  Later, a Gb leads to a cadence in Bb minor.  With many flats and sixteenth notes to deal with, this piece, labelled "Allegro", is fairly difficult for a developing intermediate player, but good experience.

Overall, this book of studies meets its target audience of the intermediate player admirably well.  An advanced player might be able to sight-read right through the book, but an intermediate player will grow in many ways by studying these pieces, which are quite attractive in their own right.  They are not the type of studies that introduce one new concept at a time, such as the Rooda exercises.  Each piece will introduce many new challenges, including rhythmic complexities.  There are many books of etudes for the developing recorder player out there, and now you have one more from which to choose.